One of my friends started a new garden this year, and stray cats in her neighborhood completely trashed the Catnip that she had planted. This matched my first experience with Catnip over a decade ago. I have experimented with a few different options for dealing with this problem: 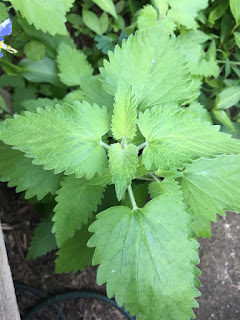 
Anecdote from my experience:

When I first started gardening, I planted a Catnip (Nepeta cataria) plant that had a solid season. The next year during Spring cleanup, I uprooted the plant, so it never came back. So, I acquired more plants, and they did well... for about 20 hours. I came out to my backyard and startled the stray cat (who now lives with us strictly indoors) we since have named Mama. She had totally trashed all the Catnip plants that we set. It was a catnip carnage. So I tried setting a plant in a hanging pot. That worked sufficiently, but that summer was brutally, and the soil would dry out rapidly, so the plant withered quickly. I usually have at least one plant in a container each year, though.

The next season I tried a combination of sowing and setting into the ground. I set small plants right at the May 15 threshold. The smaller plants were easier to handle without damaging them than were the larger plants. I planted them in the middle of Daabnessel (Purple Deadnettle) stands that were fading out for the season.

This has worked for me every season. I think the trick is to avoid as much as possible doing any damage to the Catnip plant that would cause the volatile oil to be exposed to open air in a sufficient quantity. Speaking from my experience only, Daabnessel serves as a companion plant in a couple of ways: the texture and appearance of the leaves that branch from the stem are similar to Catnip, but the aroma is far more earthy. Daabnessel grows widely on its own throughout Pennsylvania, so most of us probably do not need to cultivate it; we can just use what is already there. Daabnessel also releases its oils and aroma at least as easily as Catnip, so, if the Catnip is set among the Daabnessel, the Daabnessel aroma might mask the Catnip aroma. They are both Mints and, while Daabnessel can grow rapidly and aggressively, its Spring season is fading out when Catnip's is coming in. Catnip requires space, so, as the plants grow, I pare back the dying Daabnessel.

Setting stakes or dowels around a set Catnip plant won't stop a cat from finding the plant and eating the aerial parts, but it will make it more difficult for the cat roll on the plant or to uproot it, which increases the chances of a set plant surviving.

Another great companion plant for Catnip, also from the Mint family, is Hyssop (Hyssopus officials), which one may often find in white and blue subspecies. The two plants improve the conditions for each other. Hyssop is a critical ingredient for one of my salves, so I appreciate the relationship between the two.

Usually a few volunteer Catnip plants show up in June from last years seeds sowing themselves. Those volunteers often turn up in areas where plants in the Brassica (Mustard) family are growing, which is often for me in garden beds where there are remnants of Pennsylvania Bittercress (Cuckooflower) are still there, but I try to keep the Cuckooflower out of the main garden beds because it just takes over. However, the companion status between Catnip and the Brassicas covers pretty much anything in the Mustard family. Catnip deters many of the pests (particularly the flea beetle) that attack Brassicas. Catnip can also serve as a good protector of plants in the Gourd (Curcurbit) family by deterring pests like the squash beetle.

Setting Catnip among other fragrant plants can increase the likelihood of survival. Lavender and Rosemary have worked sufficiently for me, but the one that seemed to do the single best job was Pennyroyal (Mentha pulegium, which is a "true mint"; the distantly related American Pennyroyal is Hedeoma pulegioides and would work, too). I experimented with setting a medium-sized Catnip plant that had to be moved among three Pennyroyal plants. Pennyroyal has a distinct fragrance that is released easily, and it is, to my sense of smell, more volatile than is Catnip. Unfortunately, there is conflicting information out there about whether Pennyroyal is toxic to cats, and mounting evidence leads me to be hypercautious about placing an enticement amid potential poison.

Construction at my house this year resulted in the loss of my sole Rue (Ruta graveolens) plant. Rue is also said to be good deterrent to cats, but the area it was in was too small for Catnip to share the space. This is the weekend I will be acquiring stater plants or sowing seeds, so I may replace the Rue in the same place and then get another plant or two to test its success with protecting Catnip up in the cemetery.

Another option that many choose, for ornamental purposes primarily, is to plant a Catmint (Deitsch: der Katzebalsem; tax; Nepeta spp. other than cataria but especially Nepeta racemosa, Nepeta nepetella and hybrids of the two). Most Catmints won't be attractive to cats, so the plants will typically thrive. However, this also means that it is not "true" Catnip (which is not a hybrid). While I actually like the smell of Catmint, I stick to Catnip because it has more medicinal value to me and because I grow Catnip for my feline overlords. I was given a Catmint plant once (and I am not kidding when I say I dig the aroma of it), but I had to keep it in a container because I the likelihood of it hybridizing with my Catnip plants was way too high.

So this weekend is a great time to sow Catnip seeds directly and to transplant (carefully) seedlings or small plants into the ground.
Posted by Robert L. Schreiwer at 5:30 PM