Viper's Bugloss (Echium vulgare) is called "der Naaderkopp" in Deitsch. The plant is native to Europe but is naturalized in the Deitscherei. Likely due to the Doctrine of Signatures that associates the spotted stem of the plant with the skin of a viper and the prickly leaves with the bite, the traditional Deitsch use of the herb was to remove snake venom and to prevent viper bites. Due to the pyrrolizidine alkaloids, the plant is potentially toxic to the liver, so internal ingestion is not recommended.

The plant, though, is still used in sympathetic Hexerei to hex snakes in order to weaken them and their venom. The whole plant is burned to curse any biting snake. The juice of the plant is splattered on snake bites along with some expulsion curses and charms. There are three venomous pit viper species in Pennsylvania: Northern Copperhead, Timber Rattlesnake, Eastern Massasauga. On the plus side, though, the power of the viper may also be applied using Viper's Bugloss in a salve for "biting" boils, carbuncles, and other skin growths. The plant is safe for external use.

As is the case with the stories of many cultures, Deitsch lore makes references to charming snakes. However, there is also a belief that snakes can charm other creatures. Snakes are said to charm birds so that they fly in lower and lower circles until they are eventually caught by the snake. Snakes can charm humans, too. A human who is charmed is said to be "gebannt," which is usually the result of a human and a snake meeting each other's gaze. One way to break the charm is to burn Viper's Bugloss and to smudge the animal or the person with the smoke of the herb.

There is also a belief that stands of Viper's Bugloss appear where a snake has killed prey.
Posted by Deitscherei at 5:08 PM No comments: 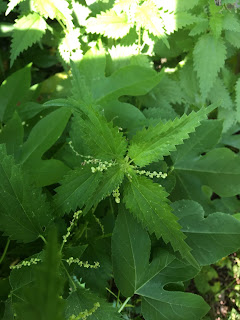 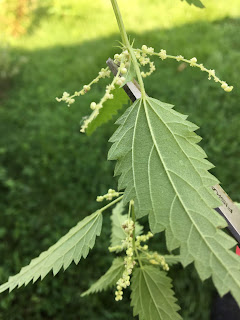 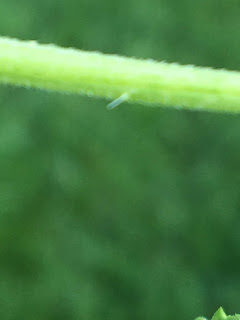 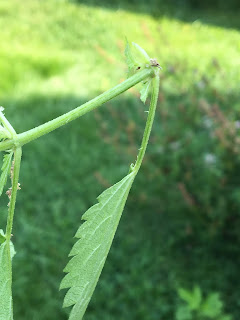 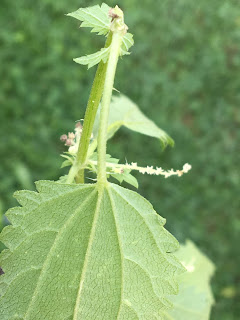 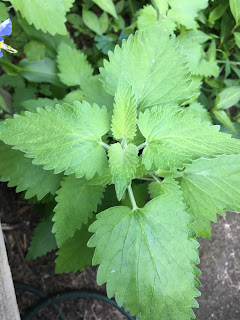 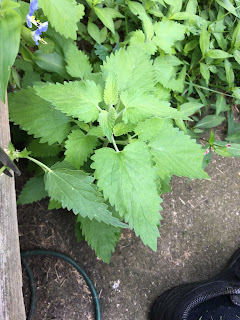 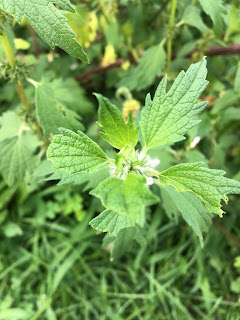 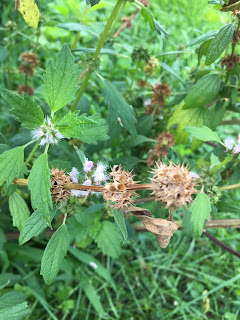 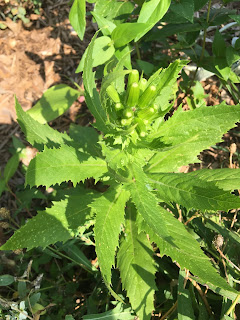 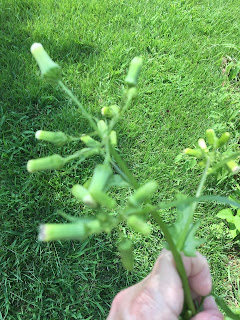 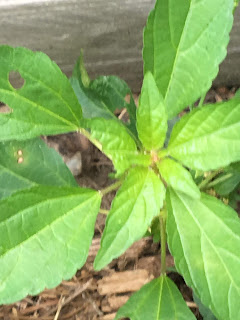 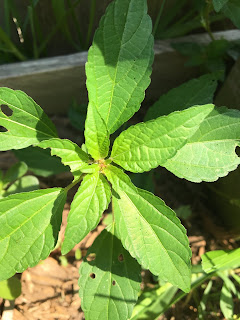 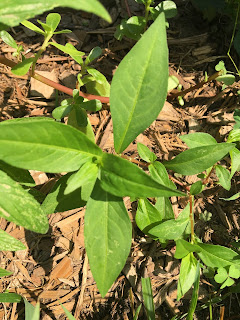 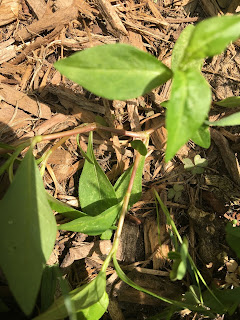 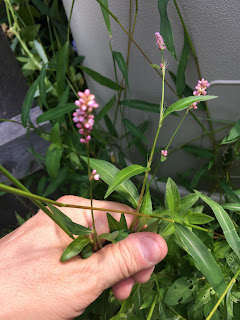 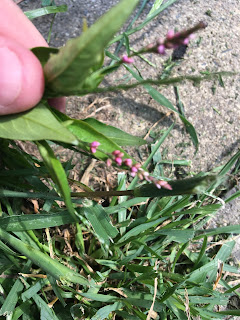 There are, naturally, other plants that are often confused for Stinging Nettles, but these are among the most common.
Posted by Deitscherei at 2:45 PM No comments: 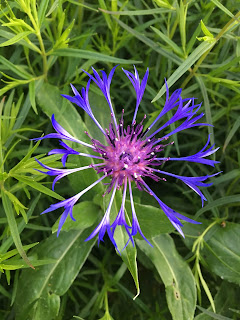 die Blobottel: Blue Cornflower (Centaurea cyanus). The significance of this flower has wide interpretations across the German-speaking lands. The meanings of many symbols, particularly those that relate to Prussia, are based in historical events that occur after the Migration. However, certain aspects of the flower, particularly those that preserve the color and overall essence of the flower when dried, make it a symbol of life. Likewise, the tenderness of the flower and its susceptibility to frost make it a symbol of the preciousness and fragility of life. The presence of Cornflower Queens or cornflowers at events such as the Steuben Parade is an echo and a reflection of the flower's symbol of life.

There is some speculation that the Blobottel may be the blue flower in the dreams of Yorinde in the folk tale of Yorinde un Goringel (a version of which appears in Mac E. Barrick's "German-American Folklore," page 109). The possessor of the flower is able to destroy enemies and to overcome obstacles.

Blobottel is common in Urglaawe funerary and memorial rites.
Posted by Robert L. Schreiwer at 9:56 PM No comments:

The orange latex or “juice” of Schellgraut (en: Greater Celandine; tax: Cheliodonium majus) has been used in traditional Deitsch remedies for centuries. Among the most common are as a poultice for ringworm, warts, bunions, and corns. The fresh juice may also be applied directly to a wart. Additional uses include lymphatic troubles and piles, though by far the most common use is the treatment of warts.

Lick & Brendle (Plant Names and Plant Lore Among the Pennsylvania Germans, p. 215) cite also that wearing part of the leaf in the shoe will cure jaundice, which to me echoes the Doctrine of Signatures relating the color of the latex to the color one takes on with jaundice. This notion is echoed by Christopher Sauer, who provides a recipe (p. 89) of Greater Celandine, Rue, vinegar, and salt to get rubbed into the soles of the feet to prevent jaundice.


Disclaimer: This information is for educational and discussion purposes only. Nothing in these posts is intended to constitute, or should be considered, medical advice or to serve as a substitute for the advice of a physician or other qualified health care provider. Feverfew may thin the blood, so people on blood thinners should be careful with its use. Also, as the herb is used in inducing menstruation, pregnant women should avoid using this herb. As always, your health is your responsibility. Consult with a doctor before using any herbal remedy or preventative.


Although there are traditional uses internally for jaundice and for gallbladder issues, the plant’s potential toxicity to the liver make it so that it should only be used under the supervision of a medical professional. The plant should be avoided during pregnancy and when breast-feeding.

In animals, it is recorded that Pliny and Dioscorides wrote that swallows used the latex of Greater Celandine to sharpen the eyesight of their young. This is echoed in later German and even Deitsch folklore that field swallows use the latex to cause the eyes of their fledglings to open.

Sauer (p. 89) provides a similar use for Greater Celandine as an eyewash for cataracts in horses.

The latex of the plant may also be applied to the skin to treat poison ivy.

Despite the potential danger of interacting with a mother wolf, whom many may associate with darker energies, the plant is also considered to be warm and dry, and, perhaps due to the color of its latex, it has some association with brightness and daylight. As such, the plant is developing an association with the goddess Helling in Urglaawe practice.

This plant, which is native to Europe but naturalized throughout much of the eastern US, is often considered to be simply a nuisance “weed,” but it is actually quite useful and is often a willing ally, medicinally, spiritually, and magically.

Posted by Robert L. Schreiwer at 12:43 PM No comments:

Springtime is finally making itself a home here in the Deitscherei, and der Hutschefuss (en: Coltsfoot;  tax. Tussilago farfara) is springing forth.


The traditional uses of this plant include the treatment of asthma (pdc: die Engbruscht), spasmodic coughs, and general chest problems in humans, and it also serves as an equine remedy for coughs and heaves.
NOTE: While horses can eat the entire plant, the consumption of the flower is potentially toxic (due to a higher content of pyrrolizidine alkaloids) and I generally recommend the avoidance of its use internally in humans, and the plant is to be avoided during pregnancy. Children under 6 years of age should avoid consuming the herb as well.  I'd not recommend the consumption of the leaves for more than two or three weeks. While many folks consider the whole herb to be safe, one should consult a physician prior to utilizing it.

The typical methods of application are decoctions and tinctures of the leaves (35A:65W). The herb bolsters the immune system and functions as an expectorant and eases inflammation of mucus membranes.

If one were to use the flowers (please note the advisory two paragraphs up) for poultices, the harvest time is usually in mid- to late-April. The flowers appear before the leaves, and the leaves are usually collected in late May or even June.

The herb's leaf is also sometimes (and traditionally) smoked, alone or in combination with other medicinal herbs such as Mullein Leaf (pdc: es Wolleblaat; tax. Verbascum thapsus), to alleviate symptoms of asthma, bronchitis, and other lung ailments. In folklore, the smoking of coltsfoot (again, please see advisory above) is said to induce visions, and magically the smoke of coltsfoot incense is said to be a messenger, particularly of, but not limited to, missives of love.

Some people also make syrups or lozenges of coltsfoot leaf for spasmodic cough, often combining the herb with other herbs that alleviate cough.

External poultices can include the flower and are effective in easing inflammation of the skin, including insect stings and abrasions.

I also just enjoy seeing the plant growing. I have found two stray turtles (not a common sight just walking in a garden in the middle of suburban Philadelphia) and one skink hiding out in the low canopy of coltsfoot leaves in mid-June.

Hopefully winter has finally let go of its grip, at least in the daylight hours, and we can all get to our gardening work!

Posted by Deitscherei at 12:43 PM No comments:

Sacred Space will be held in Hunt Valley, Maryland, from Thursday, March 15 through Sunday, March 18, 2018.

This year, there are four Urglaawe-related items on the schedule:

It's not too late to register!

http://www.sacredspacefoundation.com
Posted by Robert L. Schreiwer at 6:44 AM No comments: