Deitsch "rural legend" says that we are the "Pie People," who have more distinct variations of pie than any other cuisine in the world. Whether this is true or not, I cannot say. However, we really do have a lot of pies counted among our traditional fare.

On Day 3, I could have written an article similar to this one about Pawpaw, of which I have three trees on my cemetery property, but I was otherwise engaged. So, tonight, as Night 5 has begun, I'll write just a bit about the Crabapple and Apple. 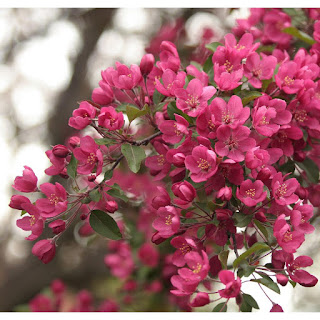 Although Crabapple is a particular type of Apple and the whole of the Apple Blossom Blessing description could just have been listed under "Apple." However, the lowly Crabapple has a special place in Deitsch cuisine because the three species of Crabapple that are native to Pennsylvania were the only apples to which the earliest settlers had until trade and orchards became more established. Crabapple pies and Crabapples used as flavoring in meals my reach back to that time of the Colonial Era.

Apples are a major component of Urglaawe Erntfescht celebrations in September, and, although Idunna is not known in Deitsch lore, the importance of apples most certainly is. The apples on the tree that cried to be shaken off provided one of the tests that the heroine of "Fraa Holle" passed, and there are many other references to apples' benefit throughout our lore.

Apples play a large role in traditional Deitsch social practices. "Schnitz parties" were (and still are) multi-family or community events in which people cut the apple harvest to prepare for the processing of the apples for applesauce or apple butter. Similar community harvests were common for other crops as well.

In order for us to enjoy all the foods and social aspects that surround Crabapples and Apples, we have to have a bountiful Apple harvest. To that end, ritual blessings of Apple trees take place throughout the region, frequently during the beginning of May. The original article about the Wonnezeit blessings (https://urglaawe.blogspot.com/2020/05/wonnezeit-tree-shrub-and-plant.html) describes a few methods of blessing, but we are still working on taking a few of them and creating some Urglaawe rituals.  Since we have not yet finished that process, we suggest that folks who do not have other plans utilize one of the straw methods:

The more practical (and somewhat common) ways to honor fruit-bearing trees includes straw in the following manners: 1. tying straw around its trunk; 2. strewing straw among is branches (which I think is a contributor to tree garlands); 3. tapping the trunk of the tree, particularly toward the base, with wisps of straw. I have used option 3 during Wonnezeit in the past.

We will continue to write about the Wonnezeit blessings and to work on the rituals, and we'll post them to Urglaawe fora as soon as they are completed.

Hail to the Crabapple! Hail to the Apple!
Posted by Robert L. Schreiwer at 10:24 PM