During Wonnezeit (sunset April 30 - sunset May 12), many Urglaawer and other Deitsch folks will spend time engaging in traditions that honor and bless the trees, shrubs, and other plants around them. These actions hearken back to old German customs that were intended to encourage robust harvests from the orchards. In Urglaawe, we have a suggested honoring schedule for some trees, but people should be responding to their local flora and environmental conditions.

Today is the 4th day of Wonnezeit, and we are honoring the Linden tree, also known as Basswood and, in the UK (and in some Deitsch variants but pronounced differently), as Lime. The lore applies across the genus. 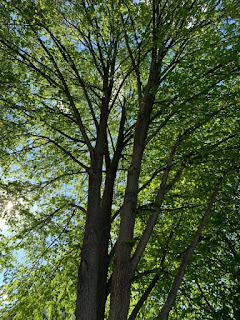 
The Linden is, perhaps, one of the more unassuming of our sacred trees.

This beautiful, spry, and blithe tree has provided comfort and shade as the town center tree in many German villages since at least the 10th century. The relationship between the tree and the Germanic peoples has strengthened and evolved over the centuries. This relationship has carried forth into Deitsch lore, holding the protective and love-related aspects of the tree while also serving as a powerful medicinal herb against epilepsy.

The wood of Linden (Lime and Basswood, too) is prized for carving, and some Deitsch crafters use the wood for statuary, protective charms, or for beautiful artwork. There are references to strips of Linden wood to divine the future by wearing it on the finger or around the wrist while sleeping.

Disclaimer: This information is for educational and discussion purposes only. Nothing in these posts is intended to constitute, or should be considered, medical advice or to serve as a substitute for the advice of a physician or other qualified health care provider.

Linden is an antispasmodic and sweat-inducing herb. It can relieve tension, including sinus headaches. It calms the mind and can ease panic attacks. It is often used as a sleep aid. The parts used are primarily the flowers and the bracts, but the seeds are also used traditionally.

Early Deitsch herbalist and author of America's first book of botanical healing, Christopher Sauer, described Linden as having "the capacity to strengthen the head and nerves, to purify the blood, to sweeten all sour, sharp humors, and to still pain in the limbs" (Weaver 197). He also states that the distilled water of linden blossoms can remedy dizziness and, when taken in spoonful doses, prevent convulsions and seizures.  The blossom water can also aid to combat cardialgy, which is a form of acid reflux that can cause bloating of the stomach in children. The mistletoe of Linden is said to behave like the tree itself (Weaver 197),

The juice of the inner bark of Linden infused into plantain water (traditional) or spring water can serve as a salve for burns. In a sympathetic, if not medicinal, manner, the sap that runs from a wound on a Linden tree may be applied to a bald spot on a human to restore hair growth (Weaver 197).

The berries and powdered seeds of Linden can alleviate diarrhea and heartburn. Swallowing Linden seeds (no more than six) is said to be able to stop a nosebleed (Weaver 197).

All of these remedies are still in active use among some traditional Deitsch Hexes and herbalists. Modern herbalism continues also to use

The tree is traditionally associated with protection in several forms. Planting the tree near the home or barn is believed to protect the buildings from lightning strikes. The same applies to it being planted in pastures to protect cattle. This, of course, brings up an association with Dunner, and, indeed, that association stands, though Oak still is the primary tree associated with Dunner.

Another protective aspect of Linden, however, is active warning and alters. Dreaming of Linden trees can herald good news or warn of danger, depending on the context of the dream. In fact, of all the trees commonly used or honored in Deitsch lore, Linden has the most lore on dreams.

Dreaming of planting a Linden foretells a coming new love.

Dreaming of a budding Linden tree is an indicator that good news is coming.

Dreaming of a blooming Linden tree is an indicator that a reversal in bad luck has begun.

Dreaming of lightning striking a Linden is a caution that ill luck or a dangerous event just narrowly missed you, and you should up your wards.

Dreaming of a Linden being cut down is a warning that your love life is in jeopardy.

Dreaming of a Linden withering is an alert that you are vulnerable to sickness or disease.

It also is said to repel baneful entities from the home.

Between the aspects of love and protection, we also see some associations with Frouwa and Freid.

However, with in the context of the Deitsch culture, the strongest association between the Linden and an individual being would be the human spirit, Gedreier Eckhart.

Eckhart remains in the service of the goddess Holle, whom he loves as much in death as he did in life. He is Holle's messenger, and he goes ahead of the Parade of Spirits / Wild Hunt to warn the living of the impending fury. Thus, much as Linden informs people in their dreams, Eckhart informs those who are awake.

Based on the Wonnenacht and the Wonnezeit myth, reference to Gedreier Eckhart sleeping inside a "lone linden tree" on "the Mannheem field" (Hexefeld in Lancaster County), it is more appropriate to have the Linden Blessing earlier in the Wonnezeit than on the 12th. Thus, it has been moved to 4th Night/Day, which is, well, today.

Hail to the Linden!
Hail to Eckhart!