Grudelrewe (pdc), (tax: Senecio vulgaris and en: Common Groundsel): Groundsel is listed as a noxious weed in many states and even in many countries. It is poisonous to cattle and horses. It is toxic to humans with prolonged exposure. The plant is native to Europe and Asia but has spread throughout most of the world. 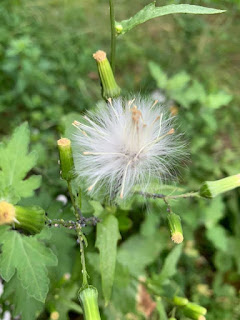 In the past, it was used in Deitsch herbalism as a remedy for epilepsy and for treatment of worms. However, there are far better herbs out there to use instead of one that is documented to be toxic.

There are some benefits to the plant, though. For starters, finches, sparrows, and some other birds consume the seeds as part of their diet. The plant is frost-resistant and runs on shorter cycles, which means the birds have groundsel seeds available much of the year. It is also a food source for the caterpillars of some moths (mostly in Europe and Asia), and it plays host to some pollinating flies and other insects.

At this time of year, many Milkweeds are releasing their floating seeds. Groundsels seeds look similar, so a Groundsel seed might be mistaken for a Milkweed seed and be caught by a Deitsch child, who, thinking it is a "Gwinschi" ("Wishy") or "Wischli" ("Wisp"), will make a wish on the seed and release it back into the wild.

Potential Pitfall! Grudelrewe vs. Grundelreewe. The former is this toxic Groundsel; the latter is Ground Ivy (Glechoma hederacea), a beneficial herb of the Mint family and one of the Nine Sacred Herbs of Urglaawe.

es Gwinschi: informally, a "wishy." Something one makes wishes upon. In Deitsch lore, it is often the floating seed of a Milkweed. The floating seed is caught; the wish is made upon it. The seed is then released and is carried away to those who will hear it (folklore varies here among ancestors/forebears, Elwe, Idise, etc.). If the floating seed lands within sight and germinates, it is said the wish has been heard and granted.

es Wischli: Similar to Gwinschi, but the original meaning is less about the wish and more about the wispy appearance of the floating seed.

Posted by Deitscherei at 2:12 PM